I recently became the owner of a Maxtang NX6412-B11 Mini PC. Cohesity gave away these barebones to vExperts at the VMware Explore EMEA in Barcelona. Once again a big thank you to Cohesity for their support of the community!

The MiniPC will be a great addition to my homelab. I had intended to install the Tanzu community edition for it. Unfortunately, the project has since been discontinued by VMware and the removal of the packages from GitHub has been announced. 🙁

The barebone still had to be provided with RAM and a flash disk. I installed a Samsung SSD 860 EVO Series 1TB M.2 SATA and two SO-DIMM DDR4 3200 16 GB from Crucial.

With the SATA SSD and the RAM, the machine was ready to boot. Ubuntu 22.04 LTS was used as operating system. After installation, a usual reboot was requested. However, the PC did not shut down completely and remained in the “Reached target shutdown” state. The PC had to be powered off hard. The reboot also took several minutes, which is very unusual for Ubuntu. To rule out the possibility that the problem is specific to Ubuntu, I tried an installation with Fedora. The result was exactly the same here too.

After a lengthy search, I found a clue that was specific to the EHL hardware platform. The fix is to disable a kernel module for the Intel Elkhart Lake SoC chipset. This can be done by adding it to the blacklist.conf file.

The line below must be added to blacklist.conf:

The next shutdown was still delayed, but after a cold boot the OS came up within a few seconds.

I hope this hint helps someone – especially my vExpert colleagues who received the Cohesity gift too. Sharing is caring. 🙂

If you have any questions about the application process or need assistance, please feel free to contact me or any of the other vExpertPro. 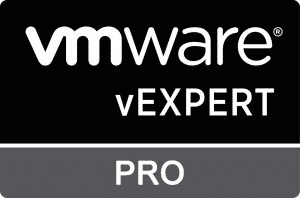 Congratulations on your vExpert Award!

I received particularly good news during my vacation. VMware has awarded me the title vExpert for another year.

This award is an honor and motivation to continue my work for the vCommunity. For example by sharing knowledge in blog articles here at ElasticSky.de, or by giving talks at VMUG Meetings or the German VMUG UserCon.

VMware annually awards the title vExpert to members of the community who have distinguished themselves in the past year through their special commitment. The award is aimed at people who have shared their knowledge and passion for VMware technology far beyond the demands of their daily work.